Right along with Anne of Green Gables, Anne of Avonlea, Road to Avonlea﻿ (the seven-season TV series), Jane Austen, Charles Dickens, and Elizabeth Gaskell movies, and all the other wonderful old-fashioned ones I failed to mention, one of our family favorites is another Sullivan produced film: Jane of Lantern Hill.


Not wanting to spoil the story, although the preview at the above website gives it away, it is a sweet story set in the 1930s of 12 year old Jane (Mairon Bennett) living with her ill mother always believing that her father (Sam Waterston) was dead. She learns that her dad is alive and living on the beautiful Prince Edward Island. The much beloved Colleen Dewhurst has a role on this film as well. If you haven't seen it, go watch it!

The fashions in general are so lovely if you like the 1930s era. It's full of darling hairstyles, silk gowns, and the whole works while Jane is living in Toronto. When she visits her dad, she wears a less "dolled-up" wardrobe. The apron, however, was what I was going to talk about. :) How can an apron-fanatic not notice an apron?! 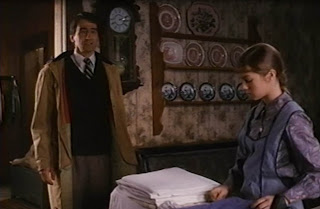 It is obviously a blue cotton fabric with navy bias. 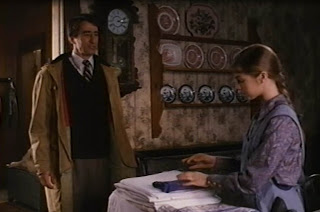 The angles in which it was filmed make it hard to distinguish if the apron has pockets on it. 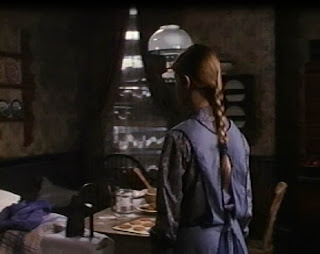 It has the traditional "H" styled back with fabric ties. In the close up below, it appears that they used some rick rack on it, too. ♥ 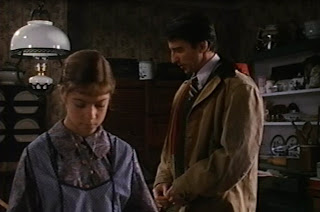 In a brief film shot outside at dusk, you can see that the back hem is rounded and not squared off like some aprons. Am I crazy for noticing all these things? Please tell me someone else does this! ;) 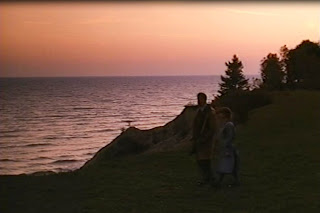 The style reminded me very much of a vintage pattern that I've seen on ebay dozens of times. The pockets may have been left off of Jane's (?) and the neckline cut into a delicate "v." However if I was going to make one like her's, like I've been wanting to for who-knows-how-long, I was not about to spend $20 on an original pattern; that I did know. :)

I decided that with a little nip in the neckline to my own original 1930s apron pattern, I could pull off a very similar reproduction of it. One of my sisters wanted a "Jane apron" and made the Ginnie style a couple years ago using some blue calico cotton and navy bias, and the result was very pleasing. If one didn't may attention to nit-picky details, one might think it was Jane's.

Earlier last week I came across a lovely piece of blue cotton that caught my eye. On the selvage, like most quality fabrics, the maker of the fabric and the title of it held my gaze. It was called "Art Deco." Couldn't be more fitting, and the fabric looked nearly identical to Jane's! 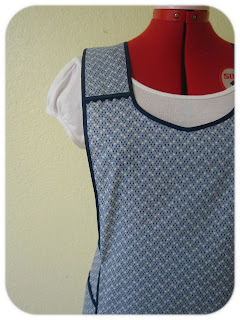 So without further ado, Peasant Cottage's version of this sweet, late 30s apron is right this way!
Posted by Cheri at 10:34 AM 1 comment:

If all else fails...

...open up the Better Homes and Gardens cookbook.

No, nothing failed except my plans on using a delicious recipe that came from a nearby Christian school when they handed the recipe to us several years ago and asked us to use it, and provide four dozen chocolate cookies for their upcoming graduation ceremonies.

I grabbed the stained and tattered red and white plaid book and opened it up to their cookie section. Ahhh. A sigh of relief. Something that resembles an actual cookie recipe. It also was the only cookie recipe that called for less than a cup of sugar! Those old-fashioned cookbooks that your mother or grandmother may have in their kitchens may not be quite so unhealthy after all. ;) 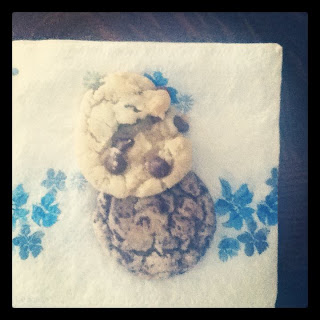 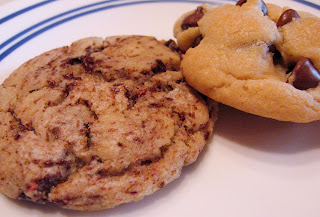 I did make my cookies into tablespoon sizes when putting them in the oven instead of using the recommended teaspoon. I also added some half 'n half to the batter since it seemed like there was to much flour. It could have been the kind of flour I used, too, which was a new-to-us Hungarian white flour. 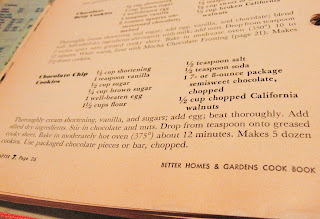 The result? Well, they are all gone, so that should be proof. ;)
Posted by Cheri at 10:33 AM No comments: Links to this post

Half a Dozen in the Shop! 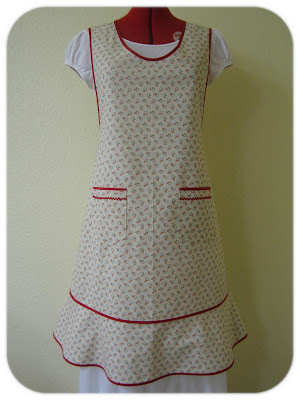 Calico's, peonies & roses, circular pockets and so much more will be found in the way of a half a dozen aprons in the shop this afternoon!

Yes, my sewing machine has been flying at full speed over the last several days, and I've been so anxious to share these goodies with you after each one has been completed but I decided to put them up all at once. There are a few stashed fabrics that I need to pull out and make up a few more, but I'm going to let the sewing machines cool down and give my sore hands a break for a couple of days.

Speaking of "dozen" today, Daddy has a hankering for chocolate chip cookies and I need to go mix up a batch for him. I'll share the recipe soon!
Posted by Cheri at 3:35 PM 2 comments: Links to this post

It's always a sad time to pull down Christmas decorations (we did so a couple weeks ago lest you think we finally got around to it just now!) but we still like to keep up or display wintery things in our home. A wreath made of pine cones on the front porch, a balsam-ceder candle burning in the evening, thick down blankets to curl under on the couch, and electric candles "burning" in the front windows. 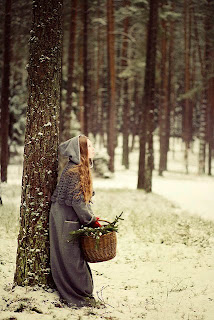 Cool weather is headed this way again (it likes to arrive and then leave quite frequently in our neck of the woods!) and I've been wanting to dress in my woolens again to have a little fun outside. 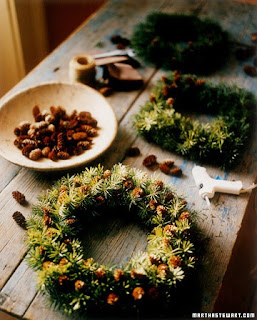 This afternoon I had fun inside sewing up a Tasha Tudor-inspired apron for gathering such little wintery things like pine branches or petite pine cones. 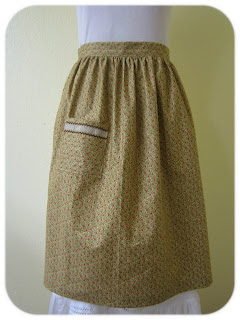 This evening it found its way into the SHOP with the anticipation of being used by a grateful recipient.
Posted by Cheri at 10:54 PM No comments: Links to this post

Very much like my paper journals, I like to go back to the archives of my sewing blog to see what I sewed years ago. In some cases my response was "I sewed that?" with a twinge of disgust, and other things brought back a wistful nostalgia when I remembered hand sewed Regency gowns﻿ of silk or learning how to create a circular flounce on the hem of a skirt.

All of the entries on aprons that I posted were full of smiles and joys of "I remember using vintage rick rack for the first time on that one" or "I went to three different stores trying to find a color corresponding bias tape for this fabric." Each one was a special creation that contained much thought and concern as to what color of bias should be used, if lace or a vintage button should adorn a pocket, or if whether this fabric would look good in a different apron pattern or not.

Posted nearly three years ago, I asked a few questions about aprons and if I truly have over 70 blog readers like blogger says I do, perhaps you (yes, you!) :) wouldn't mind dropping a note? 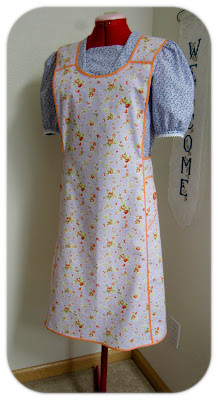 Just because aprons are making me smile this week, perhaps you'll smile too to learn that all of the aprons in Peasant Cottage will be shipped for only a dollar through Friday. :)
Posted by Cheri at 4:03 PM 2 comments: Links to this post

The time has come for me to sell my vintage book collection. Over 30 titles with books ranging from dates of 1840s to 1940s. Authors such as Wetherell, Goudge, and Dickens are in there. 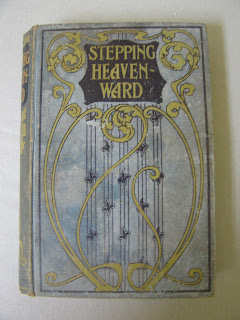 Ps. If you want to share this with your friends, I wouldn't mind one bit. It really is crucial for me to get these into happy hands.
Posted by Cheri at 5:39 PM No comments: Links to this post

What a delightful surprise it was for me to be online to find that my Country English Cottage apron in Peasant Cottage is featured in a treasury on etsy. Being featured has happened once or twice before, but this one I have to say is one of the sweetest collections of pretty tea things. 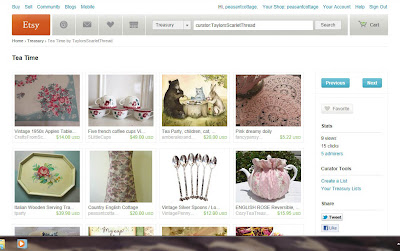 You still have time to boil some water and fix yourself a cup of tea before times runs out to visit the treasury here!
Posted by Cheri at 11:44 AM 2 comments: Links to this post

A Skirt for Cheri

This is a copy of a copy of a skirt. My friend Laura made a skirt early this summer off of a friend's skirt. Since she was a copy-cat, I was hoping she wouldn't mind if I was a copy-cat too. ;) She didn't mind, and I wrote about the story more in detail several months ago if there are any new readers to my blog.

For Christmas my parents kindly bought me some neutral tan linen fabric so I could make a skirt for myself. Another linen skirt of a similar shade was worn until it was literally thread bare, so I was extremely grateful for it and I knew exactly which pattern I'd make it in.
Most everyone knows that I've made three other skirts using this pattern, and they are all for sale in my online shop: Tally Skirts.
Posted by Cheri at 5:00 PM 4 comments: Links to this post